“Any wild goose chase is better than having to actually chase wild geese.”  –David Craig

My obsession with that summer feeling has to do with getting a few summertime minutes when I can catch my breath and relax. Now, days into Autumn, I can no longer deny that another summer has passed me by. Summer thoughts had me flashing back to a day when I could fritter away an afternoon looking for dentures cemented in the sidewalk. Should anyone have asked at that point, I might have seemed less crazy because I could explain it away as archeological research for the purposes of writing a blog post.

A land of rubble and teeth.

What? Wait a minute, dentures in the sidewalk? It’s quite the legend, one that I could not leave alone. Curiosity inspired me to seek out a story that’s grown mythic in stature. I was lucky that Pittsburgh Orbit founder Will Simmons regaled me with what he knew of these dentures immortalized in certain sidewalks. Ours was a feeble attempt to find them. The search began on the afternoon of August 14 in 2017. Will had gotten a tip from his friend Kate who had lived in Portland for 10 to 15 years. She told him about an artist who placed dentures in the sidewalk in the 60’s. I’ve come to realize that we were making a spontaneous effort to locate the embedded chompers. We were down around the bike path that leads people to the Tillicum crossing. We could see the tram station and a couple of glass OHSU buildings. The only thing missing were sidewalks, and teeth.

Where are those teeth?

The spur of the moment search was reflected in our texting Kate back and forth to pinpoint the location. Impatient, I wanted to see some old teeth with little effort while hoping technology could make it happen somehow conjuring the ancient dentures. Two years later I contacted Will for his memories of this fruitless search. I was interested in his musings about that day which was a small slice of a long vacation he took in Portland. I asked him if “stumbling around looking for dentures was not the highlight of his Portland visit?” He referred to the texts from that August afternoon two years ago, saying we had been given an area to cover “between Powell and Sellwood.” Even he realized the territory was more than we could check out in an afternoon. Will also figured out we were on the wrong side of the river. This was telling. We were out there desperate for random teeth, any teeth would have satisfied.

Under the bridge, some teeth fell out.

Dentures embedded in sidewalk in South Portland–has anyone ever heard this legend?

An acquaintance has this story about an artist (possibly PSU professor?) taking either dentures or dental molds and embedding them in sidewalks in the vague area of “somewhere along the river in South Portland.”

Is this something anyone had ever heard of? Can confirm? Knows more specifics on?

Attempts at Research Of Any Kind Pays Off!

It’s a rare thing that a Portland Orbit post resorts to leaving readers with a list but here’s some of the responses to Will’s query.

One respondent quoted a passage from a book titled: The Pursuit of Happiness A History of South Portland which described the dentures being set in the old concrete sidewalk at the SW corner of Corbett and Sheridan.

Dentures can also be possibly be found in the following places:

A mural near Stark and 13th, was described as having a 3D denture flying from an old woman’s mouth.

I got a kick out of a Reddit commenter describing this denture siting as “underwhelming.”

I got into the game realizing I could check out Facebook groups like Hidden Portland for the Curious and Dead Memories Portland. If only I had thought to search these out before Will’s visit.

A post on the Facebook group Hidden Portland for the Curious revealed the false teeth could be in the sidewalk on the corner of SW Kelly street across from the OCOM building.

Responses to that post mentioned the teeth being dug out of the area around SW Water off Barbur, possibly around Abernathy. A reader chimed in that they were at Arthur and Water and nicknamed “Arthur Water’s teeth.”

There was one more location mentioned on the Dead Memories Portland Facebook page–the west side of the Ross Island Bridge.

The hunt is on. It’s looking like I’ll be stumbling into multiple parties of tooth sleuth’s in the next couple of weeks. I promise to follow up these leads and report back on my findings.

I was diagnosed with “summeritus” by a clerk at a Dollar Store a few years back. It wasn’t a medical diagnosis but the word stuck with me. There was no time for explanation. This wasn’t a Kevin Smith movie so the comment wasn’t overanalyzed. I had stuff to buy and places to be. A few summers later, I continued to contemplate the meaning of “summeritis” coined by that Dollar Store clerk/savant. Discussion around the Orbit office lead me to conclude that while medical terminology usually describes afflictions, I see this as a condition to embrace. Pacific Northwest summers are short. They deserve appreciation and sloth. So I’m really looking for a something to believe in that helps me enjoy a Portland summer. The resulting post, an annual one at that, is a reflection on taking it easy and embracing “summeritis” as a temporary condition, whatever it is.

I spotted multiple video surveillance signs, none of them homemade, but I was struck by the different old school cameras and the imposing thought of being watched every and anywhere. There’s footage of me taking pictures of signs that warn me about being surveilled. I get it. No one wants their Walgreen walls or parking lots messed with. Let these signs be a reminder of the many reasons it’s better to remain behind cameras.

I never figured out this stretch of SW 45th and the reason for reminders for people to pump the brakes. A slight curve and a deep ditch contribute the need to heed a sign slow down. The handmade sign coexists with a regular traffic sign. The slangy nature of the sign’s phrase made me realize how much sense it makes to replace two vowels with the letter “e.” Take the sign’s advice. Read this post slow. It has words with curvy letters that might crash your brain.

A tiny student made stop sign graces the entrance to the Sunstone Montessori School in South Portland. Who is being asked to stop? It’s almost unnoticeable. Perhaps students get extra credit for sign making. Their method proved more interesting than an average stop sign.

The city’s campaign to get everyone to drive slower hinges on a brilliant bit of rhyming wordplay. “Twenty is plenty.” Okay so you can argue the brilliance of it but someone, somewhere had a moment of lightbulb exploding inspiration. You can almost hear the bug eyed scream, “TWENTY IS PLENTY! EUREKA! THAT’S IT!” These signs are ordinary but a line of rocks painted the same color creates a nice eye path to the message. 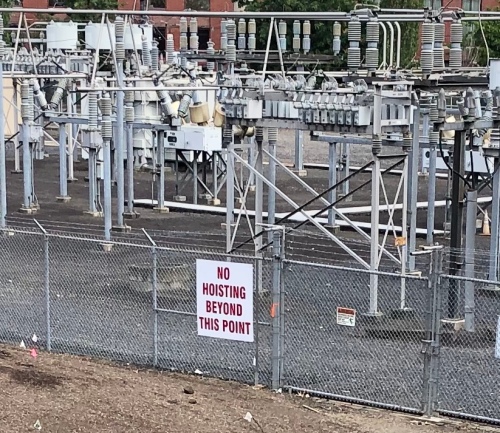 Here’s a declaration for a limited audience. Those who know about hoisting need to know where they should and shouldn’t hoist.

To Dump or Not To Dump

I was amused to see a no dumping sign getting specific with examples of what not to dump. While the sign is pointing out that nothing should be dumped, it’s illustrated with a trash bag, tire and washing machine that should not be tossed aside to rot and rust and become someone else’s disposal hassle. The image makes me laugh at the realization that the popularity of pick up trucks makes it easy for people to pull up with their pony tail wearing driver/accomplice and empty a bed load of junk anywhere they choose to ignore a no dumping sign.

An old sign in the West Portland Park neighborhood used to do it’s duty. Now it looks like it’s been dumped itself. The message is clear enough to keep this patch of wilderness trash free and it’s more intimidating. A Wheel of Fortune watcher could fill in the blanks without buying a vowel.

To Climb or Not to Climb

The sign may not keep anyone away from the temptation of climbing this wall in the parking lot of the Memorial Coliseum. Red screams danger while the capital letters broadcast a louder warning. It is a long way down to the next parking lot so it is better to be safe than mangled.

At a Portland Public School site in Northeast, a sign benefits from an additional sticker or drawing. All signs should be rendered this interesting. No matter how much someone enjoys climbing on roofs they have to realize it’s not as fun as having to spend time in a court.

Closer To The Fine 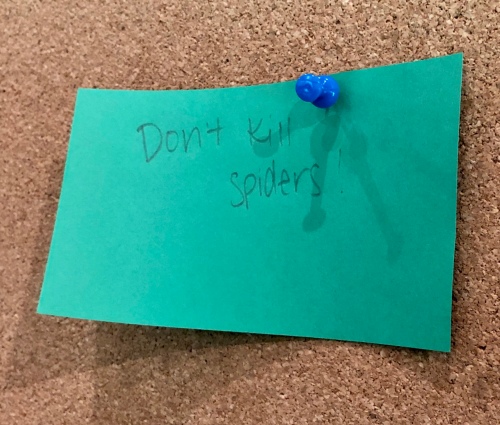 The appeal here was in the random nature of this tacked up post-it note that may not qualify as an actual sign. Spotted at the Tryon Creek nature center, this could this be the lost 11th commandment or an attempt to remind people that not all spiders are evil, poisonous, diabolical creatures plotting a takeover. It asks its readers to reconsider if they were thinking about going into the forest to kill spiders. Let the arachnids live their happy, web making, scheming lives deep in their natural habitat.

Sticking It To ‘Em

I’ve seen plenty of stick men traffic signs. I never batted an eye until I saw this one in Tigard out near the train tracks and bike path. Here I encountered a beefy stick man with power thighs that gave me pause. The juxtaposition between biker and pedestrian indicates a competition. Bike riding is painted as the way to a fit and sleek physique while walking leaves you looking like a beef stick.

Pick On My Pet

Before is even better!

No one wants pet waste from pets that aren’t their own on their lawn. It’s not like people ignore pleas they’ve planted in their yards. These signs, cranked out for purchase, feature a happy dog and three exclamation points. This message seen in West Portland Park makes the signs spotted in Multnomah Village encouraging dogs to do their business make even less sense. 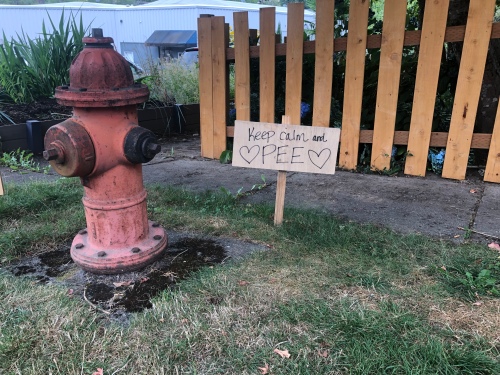 Who’s Property Is It?

This sign serves a purpose but it struck me as odd. It’s meant to rust away in a trail side section of brush bordering I-5 in the Crestwood neighborhood. In case anyone is wondering who owns this land, well, it’s the Department of Transportation Highway Division and they must be making a declaration of pride along with an acknowledgement of ownership. It’s ours so don’t try to take it and build a condo. They must be confident that no one is willing to live so close to an Interstate highway. 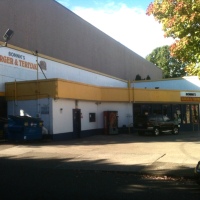