It was challenging to find the post I spotted on Facebook until I realized it doesn’t matter. It revealed there’s a Trimet publication about public art at Max stops that you can read online or download for free. I’ve wanted to write about Max art for years. I never had the right angle until now. The Trimet publication offers stories behind art splattered along the Max lines, art hidden in plain sight that attempts to break the monotony of waiting for a train for those aware enough to notice.

The art publication was denser than I imagined. The yellow line section was 68 pages in its pdf form. The overview section had me looking at early days of art meeting public transit in black and white photos in a newspaper layout. The different Max section write ups come in full color that jumps off the page and catalogs the art along the tracks and around the platforms. I’ve been noticing and taking photographs of Max art since 2016. It’s satisfying to explore this topic after putting it off for years.

The Denver Avenue/Kenton station is full of great art. Some of it has a found art feel, an added bonus. There are the metal cow cut outs grazing along the track that I learned are are known as guardrail panels—a homage to the neighborhood’s cattle stockyard history.

The mosaic work on the ground/platform is by Mary Taponga. I remember meeting her after trekking to her art shop, Hail Mary, that used to operate in NE around 28th Street. I was there on Election Day 2008 where we shared our anxiety about the uncertainty of that election. Her work is all over the McMenamin’s Kennedy School. On the platform there are mosaics tiles and found art objects housed in what I imagine is some kind of epoxy. The objects have the look of those soaps with something in the middle that appears as the soap wears away. In this case, these elements of the art piece have remained mostly unscathed through the years.

I had always assumed the benches, also known as Terrazzo seating, were created by Mary but the Trimet publication proved me wrong. The benches reproduce scenes from the good old days in tile. It amazes me that a bench at a Max stop evokes feelings of nostalgia with images of the neighborhood’s streetcar and movie theater.

Somewhere down the yellow line, (the North Prescott Station) the occasional blue tile is substituted for the brick at the train platform. The tiles are randomly placed, but the blue glass pops when seen alongside the industrial brown shade of the bricks. The Trimet publication explained that the blue glass bricks “hint at imaginary waterways beneath the station.”

Outside the Kaiser Interstate medical building, it seems fitting that the platform sports medical imagery. Teeth, bones, a map, I’m not sure what’s all going on here but once again it outclasses the concrete. The Max art scheme is big on community maps, a concept I’m not familiar with, but this piece in particular features a street grid.

One day at the Rose Quarter Transit Center I looked down at the pavement. First I discovered sporadic concrete circles in the platform area. I realized the circles were full of circles–one circle smaller than the next with the rings getting smaller and smaller. Then it hit me: Stump tops in concrete.

When I looked at the Trimet Art guide, I found out this was all part of a theme. The stump slices are part of a broader art installation that includes an electrified forest and an artistic take on a fire pits

So there you have it. This yellow line report barely scratches the surface of the art on the rail lines. My hope is to inspire the masses to map out the rest of the Max lines and take art excursion/art hop to see all the creations. You might not even have to get out of the train.

OC Visit No. 1
Send Help
Peace, Love and Smiles
Portrait
Tonight’s Entertainment: Sydney Plunkett plays all the hits in “Sydney by the Sea.”
I Don’t Get Out Much (No. 4) 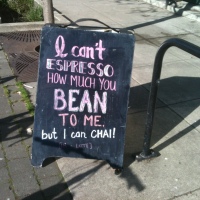 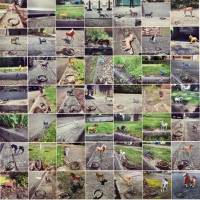