On a recent couple of Max train trips I noticed a flag. It had stripes of blue and yellow outlined with white on a green background. I saw it flying over PGE Park. I know, I know it as PGE but it may or may not still be Jeld Wen Field. I had a conversation with someone who said it was now called Providence Park. This could be figured out with a quick search on the web but, anyway, the flag was flying where the Timbers play. I also saw it at a couple of fire stations. I was clued in by a sticker on a car. It was the image of the mystery flag with Portland printed underneath. Some quick internet research confirmed what I did not know after living in Portland for seven years. Portland has a flag. I had been mystified. This flag was all over and looking nordic to me, like a Finnish flag with different colors. A poster I saw while substitute teaching at an elementary school made me realize the colors and design reminded me more of the Tanzania flag. 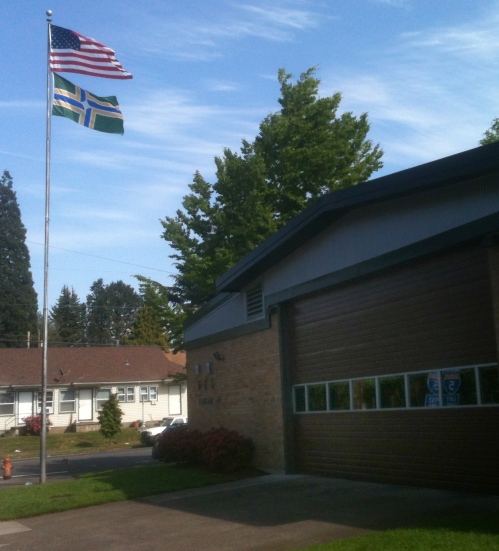 This flag had my imagination wandering. I couldn’t put it together until I saw the decal. To give a true feel for the flag I could have borrowed an image from the internet and used it in this post but I was stuck on that particular decal image. I have no idea why I didn’t take a picture of it when I first saw it. I started obsessing over that decal. I kept going back on dog walks to where I thought I saw the car with the flag decal and I could never find it. It’s not as popular as the decal of the outline of the state of Oregon with the green heart in it. After a few bike commuter rides to a sub job and observing multiple car decals, I ran into the image on Tillamook Ave and snapped a photo.

Portland has a flag.

We saw the Portland flag flying outside a restaurant in Multnomah Village and my wife, Ronna, started speculating about what the colors represented, like green being about the ecology and blue symbolizing our rivers. It’s true, the colors and design are all significant. So in order to not get bogged down in those details, allow me to introduce a secondary source. I would have considered good colors for a Portland to be black, red and silver. The same colors as the Trail Blazers or representative of darkness, blood and silver.

The more amazing thing about my Portland flag discovery was learning about vexillology. I knew nothing about it. I can’t even pronounce it but it makes sense that there would be people interested in flags enough that there would be a science behind it. I could tell you more but you will soon be looking at a blog—what?!? Star Wars flag posts—and possibly be attending a meeting. You’ll become more obsessed with flags and flag decals and their design and symbolism than me.

Check out the Portland Flag Association website. The blog might make you think about flags in ways you never have and you can go to a meeting:

One thought on “Portland Has a Flag?”