When a certain bleakness creeps in under gray skies, I take every opportunity to consider some of the sights I’ve seen and captured digitally this summer. These are the kinds of things that might cheer me up through the long, dull rainy season that appears to be bearing down on us after a couple of dry months. These objects usually involve the stuff I like in the form of shiny, junky plastic which happens to be the material of toys. I’ve concerned myself over the past couple of years with rooting out marginal expressions of creativity. Looking around and noticing random displays of toys in my neighborhood, in tree hollows, yards and on cars, has allowed me to find a way to break up the monotony of my neighborhood surroundings.

These plastic eyed rocks caught my eye and had me keeping both my eyes peeled for additional North Portland toy scene arrangements. Tucked against a fence, these rocks resemble a hard luck doll. Without handdrawn mouths, it’s hard to gauge their moods but it’s quite the realization to discover that wiggle eyes can bring something as hard, cold and lifeless as a rock, to life.

This creature could inspire the beginnings of a future, full blown, art car decoration theme. In his current barren state, he remains  twisted and scary. The ratty tape job seems to be keeping this gizmo standing and fastened to the hood. You have to respect its willingness to go a long for the ride enduring mile after mile of forced hood surfing.

This fall could use some water.

This fountain or maybe it’s a rain catcher is the center piece of a scene that reminds me of Multnomah Falls. I appreciated seeing the bridge brought to life with a family of Playmobil characters. A bit of water would complete the scene but we don’t get much rain in the summer. Everything about this scenario is accentuated by well done design elements like the moss on the rocks, the plantings, the partially hidden Berenstain Bear character and the wire holding the toys in place. 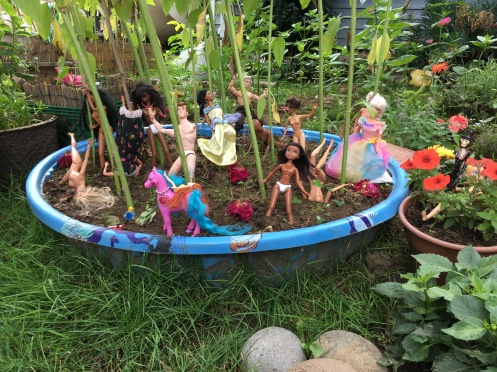 This looks like a depiction of the kind of pool party that was better than any pool party anyone attended this summer or any other summer, with its dirt substituting for water, a pink pony, and beautiful people in varying states of undress dancing crazy in a bamboo forest. 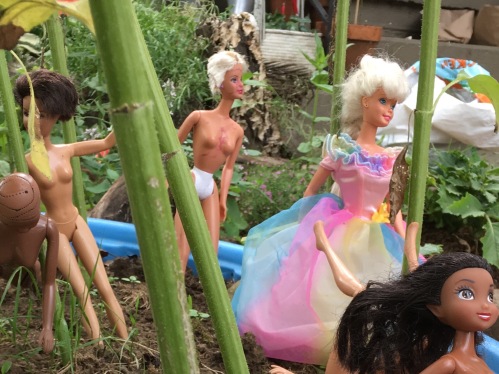 Detail from a cool party.

This scene appeared in a Kenton neighbor’s yard and has continued to deteriorate as some of the party stragglers refuse to go home.

When the party’s over… 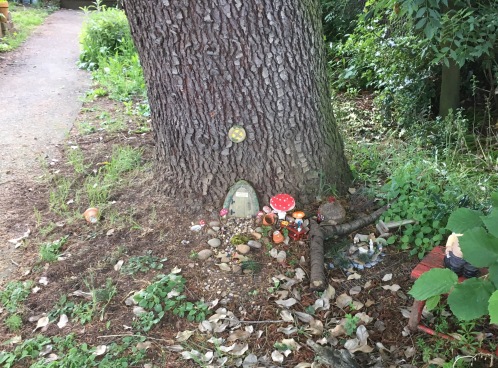 Move in ready for relocating Gnomes.

A few toadstools and/or colorful mushrooms and a miniature door made me think that this tree,  in the Alberta neighborhood, has been turned into a Gnome condo. Gnomes may well have the ability and willingness to pay the outlandish prices for one bedroom condos. 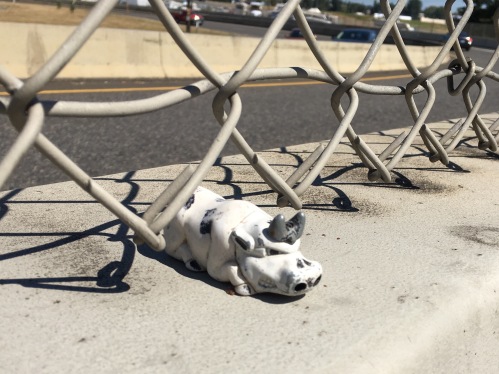 It finally occurred to me that instead of taking every misplaced toy home I can take a picture. Somewhere along the way  this angry bull found himself on the side of I-5 without even a thumb to do some hitchhiking so he could get out of town.

Hanging in the Hollow

Curb side living at Gnome hollow!

The story of the discovery of toys tucked away in the hollow of a Kenton neighborhood tree (see the ping back in the comments section) straightened me out about the differences between Trolls and Gnomes. It’s nice to have expert readers who are willing to set me straight in a nice way. We continue to keep up to date with the latest additions to the tree scene and it’s ever changing cast of characters.

Hanging in the hollow.

5 thoughts on “Toyz in the Hood”