There’s plenty to do at the Oregon coast, even during a rainy weekend. There’s bad cable television, waves to look at and listen to and rain showers to dodge when the time seems right for a walk on the beach. But I was on assignment. No, I hadn’t gone to Seaside, Oregon for the sole purpose of hunting down the remains of an old teen club but since I was in the area, the exact area, I knew I could make it part of my agenda. I was really in Seaside because my wife, Ronna, was attending a conference at the Convention Center. My real assignment was to monitor the dog and keep him from barking and waking everyone up at the hotel.

When Will Simmons from the Pittsburgh Orbit was preparing a post for this blog to celebrate the anniversary of the Kingsmen’s recording of “Louie Louie,” I read the story about the origins of the song and kept hearing about the Pypo Club in Seaside. I was in the right place to snap a few photos of the place that played a part in the song’s history. By now, hopefully, you’ve read Simmons’ “Louie Louie,” post. The Pypo Club was integral to the Kingsmen’s association with the song. It was at the club where the band kept seeing kids get up and dance to Rockin’ Robin Roberts’ version of “Louie Louie” every time it came on the jukebox. This inspired the band to perform it themselves. Obsessives like me find this moment of inspiration historical. It led to the Kingsmen recording “Louie Louie.” Historical events mean building preservation and plaques. I knew the club was on Broadway so after walking to the Convention Center the night we arrived I found the street which is the town’s main drag and headed towards the ocean. I expected to see the Pypo Club looking familiar like the old photo I’d seen but the darkness kept it hidden. That was okay since I had the next day to find it. 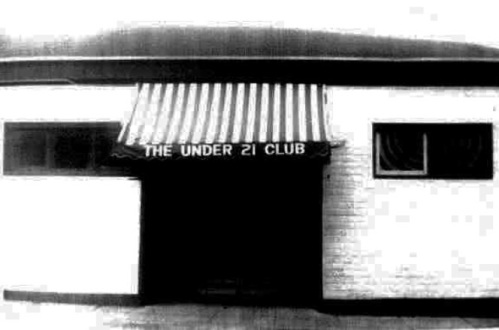 The Club keeps you young.

The following morning I did more research. I read the obituary of the man, Gil Tolan, who co-founded the club in 1961. The Pypo Club got a brief, one sentence mention. The gentleman had a full life so the obituary explored his many other accomplishments. Then I discovered that the first Pypo Club was torn down. This club had figured so prominently in rock history and yet I could find few specifics about it. Some Facebook mentions seemed concerned with casual reminiscences. Somewhere a comment explained the building’s demise.

A commenter tells the tale.

With all the development that had gone on in the last 50 years it made sense that a teen club would be inconsequencial. Right there at the point where the Pypo Club would have faced the ocean was a concrete bunker complete with a roundabout for auto traffic with a statue of Lewis and Clark in the middle. Underneath this were the public bathrooms. Additional research revealed the club had moved to a second location in a building that became an electrical business. That too was torn down to make room for a parking lot. I never determined when that happened. I was sitting in a hotel room like I’d been bowled over by a rouge wave. I had nothing to photograph. There was no way to capture the Pypo Club aspects of the “Louie Louie” story.

I thought I needed to go to the electrical business named Borland’s. They had moved into the second Pypo Club on A Street. That business then moved to G St. I’m not sure if I had a specific address other than the street name but I was thinking that the town was small enough that if I drove up and down G Street I’d see it. I imagined a back office with photos of old buildings and stories about rock and roll legends but I never saw the business. Surely the internet would have told me if the business was still around and if they had weekend hours, but I missed the part where the business was actually located in Gearhart. I regrouped because I knew I had spared someone, and myself, some awkward and over-caffeinated blubbering about being a blogger hot on the trail of a rock club who’s name I couldn’t even pronounce.

History is made here.

I remembered seeing a sign for a historical museum in the area and I headed back to find it. Walking in and seeing the sign for the 3 dollar entrance fee had me telling the man at the desk in the entrance way, “I don’t have any money but I’m trying to find information about the Pypo Club.” I still wasn’t sure how to pronounce it so I said it both ways, “Pee-po” and “Pie-po” to be safe. I explained that it was an old rock club where the Kingsmen and Paul Revere and the Raiders played. He said he hadn’t heard of it. I think I babbled a bit about what I knew about the buildings being torn down. I mentioned the ’62 riots which were associated with the Pypo Club. He seemed to know about that. Then he disappeared into the back and brought out an old phone book. I would have preferred he bring out an old timer they had stashed in the backroom with exstensive knowledge of the town’s early rock years. After going back a couple of times, he found a phone listing in the 1963 book. He had spent a few minutes looking the club up under the letter U. The photo I showed him had “Under 21 Club” on the awning.

I’ll admit it was a bit confusing but I realized Seaside had more history going on than what happened at the Pypo Club and there was a whole museum devoted to it. The volunteer was younger than me but I was still mystyfied. I mean the Kingsmen, “Louie Louie,” the germ of an idea had happened in Seaside. Why wasn’t it a bigger deal? Why didn’t everyone know? I took a photo of the listing in the old phone book, evidence that the place existed. I left wracking my brain about what else I could photograph, but forgot to take a picture of the museum. I made my way back to A Street and took pictures of the empty lots across from the Dairy Queen the man at the museum told me about.

Not in the area of the second Pypo Club.

The next morning I realized I could go back to the old address of the original club, 1 N. Broadway. Here’s where I remain confused. Either I saw the club listed at this address or wanted to think that the address still existed even though the club is long gone. Right there in the phone book it’s listed as 1 Broadway. The thing I got excited about was that with it’s black stripes the awning looked similar to the one in the old Pypo Club. Due to some early morning chaos, my first picture was crooked. When I went to take the picture the dog growled at a man who approached the store then turned away, while out front a woman was having her car towed which wasn’t going to make a nice wide shot. As I was packing up to check out of the hotel, I made plans for more photos. I needed the histroy museum and business at what I thought was the old address or at least a better awning shot. I was in need for a witness to this history but was in no mood to hang out at the local eatery, the Pig’n Pancake restaurant and badger random senior citizens with questions. 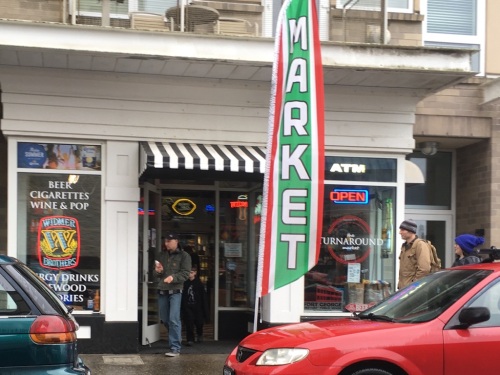 There I was scrambling around, carrying bags in the pouring rain, loading the dog in the car, going back to the room for the last load and dealing with a key card that stopped working. The museum was easy. It was all about waiting for the flag to unfurl just right, but even that ended up getting cropped from the photo. Getting back up Broadway at noon proved tougher than I realized. It’s a small area but traffic congestion combined with the longest red light I’d ever experienced was making me late. I still needed to pick my wife up from her conference. I drove past the market somehow related to the Pypo Club snapping photos and realizing that driving while photographing was probably just as dangerous as driving while texting as I then began to navigate the turn around. I took a deep breath slogged for another block back through traffic and realized that I, at least, had a few more options of photos to tell the story of the Pypo Club a place that’s gone but who’s spirit emanates from the sun, rain, wind blown sand and ocean spray of the resort town of Seaside, OR.

Next time: A visit to the “Louie, Louie” sculpture located in a Portland federal building.