Previously on the Portland Orbit: Last week we covered part one of the Portland Shoe Art scene including shoe street art, an art car who’s crowning achievement is a high heel shoe and local documentation of the phenomenon of shoes on telephone wires.

Lately I have been engulfed in thoughts of Shoe Art  which have had me considering what contribution I could make to the Shoe Art world. Below I offer my first attempt: 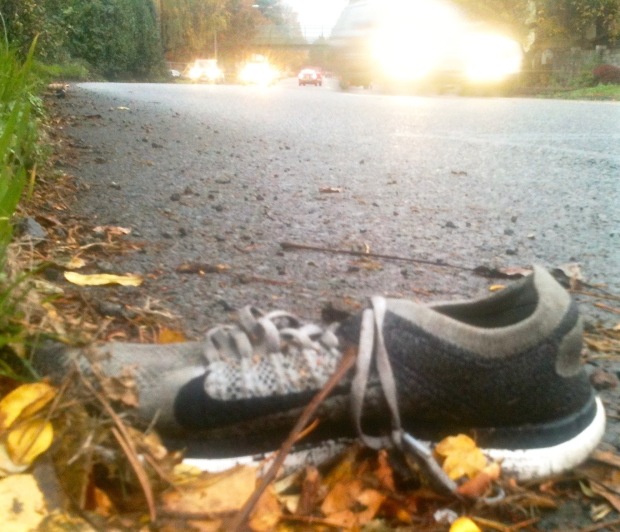 “Doom of the Shoe.” To one man trash; to another art.

I was inspired by the abandoned shoes I saw strewn on Columbia Blvd. They cried out for me to capture their essence, not as derelict shoes but as Shoe Art. Or maybe I cried out to them, besieged by my need to become part of the Portland Shoe Art scene. First I had to wonder, why it always one shoe? Did the other shoe run/walk/crawl away? Knowing that’s not possible, I began laboring over street shoe photo sessions while avoiding getting run over. After studying the results of my efforts for quite some time it dawned on me that giving the picture a sensational title like “Doom of the Shoe” would create a larger artistic impact. For what it’s worth the shoe was too close to the side of the road to ever have to worry about being run over. My next experiment involved framing a series of shoes as one image. I hoped this would have a better chance for Shoe Art consideration. Luckily modern technology makes this easy. I do feel I’ll be contemplating the artistic value of shoes grouped in threes until someone comes and puts a net over me. After some deep thought, I realized I couldn’t defend my single panel triptych as art, but no one can say I didn’t try. 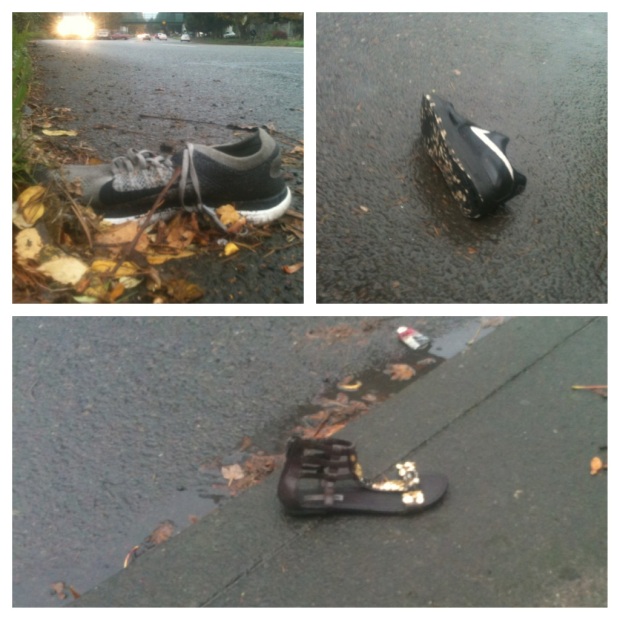 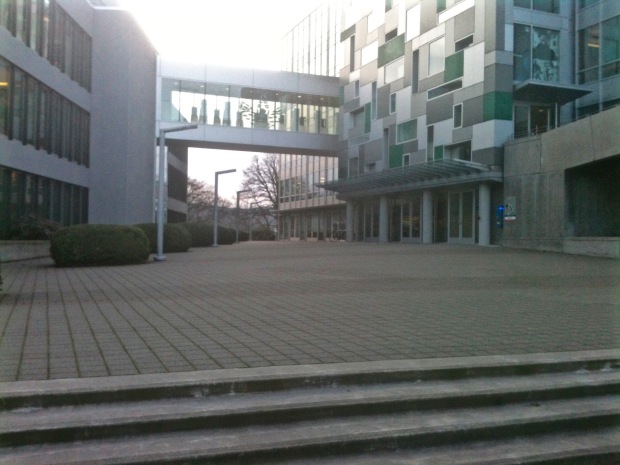 I went back to my corporate shoe offices and my giant shoes were gone!

Imagine my surprise biking over to the Adidas corporate campus to visit the pair of enormous Superstar shoes that I always remembered passing on North Greeley and finding them gone. I thought they were always there. I mean how easy is it to move a giant pair of shoes anyway? Did a nefarious shoe collector have them stolen for his private collection? I liked that shoe sculpture because Superstars were the first pair of Adidas I ever owned. I felt empty and sad with a big whole, not in my heart, but in my Shoe Art blog post. I had to think quick. My first thought was to ask people about the giant shoes. Workers were spilling out of the office on a Friday afternoon and might have been willing to talk but after an insane day at my own job I was afraid of being seen as the crazy person mumbling about giant shoes and blogs. I took a ride around the corporate offices on the other side of the road to see if I could spy Shoe Art of any kind. I was hard up for Shoe Art.

In the distance, near the soccer field they use to for product testing, I saw an oversized pair of cleats. Huge shoes are Shoe Art and this was the real thing. I crowded a group of tourists taking a picture, waited impatiently for them to leave and then I grabbed my shot. How can I critique the design when I had found an example of corporate Shoe Art? Actually the cleats are wildly decorative and would be distracting to the other team. I expected the shoes to be open to let people crawl around in them. There’s probably a fetish for that. The shoes were enclosed with a roof at the heel that made a place to sit. While they leapt out at me in their design and size they seem randomly placed in the middle of a plaza. These sporty shoes are in dire need of a pedestal. The corporate Shoe Art had a pop art feel that seems to have driven the other examples of Shoe Art underground or in some cases into the street. 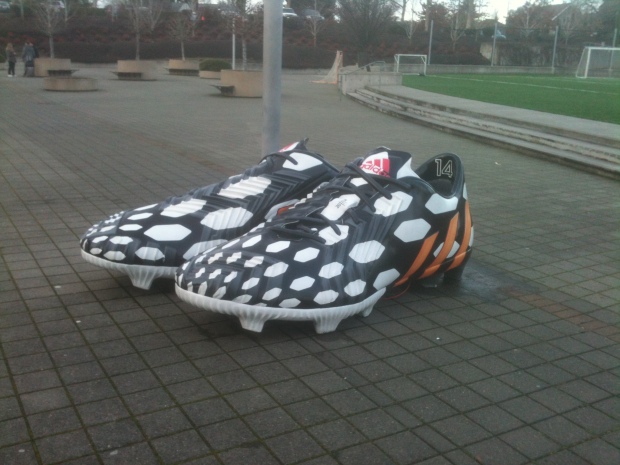 While I was thinking about Shoe Art all the time, collecting images and organizing my many thoughts on the subject I was leafing through the Portland Mercury when I came upon this image: 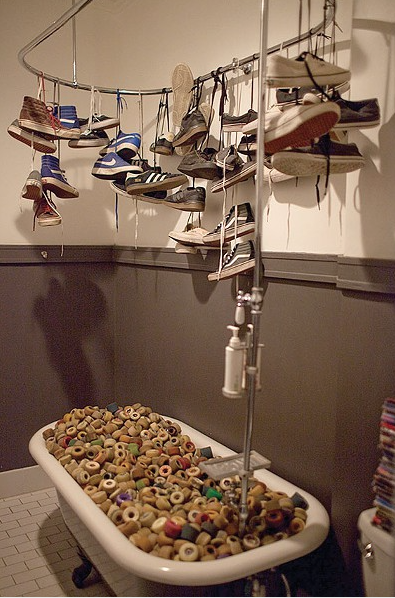 I stopped dead in my tracks. Shoes, so many shoes hanging, I was amazed by these hanging shoes. I have to admit I wasn’t getting the concept, these shoes were artistically arranged around a bathtub full of skateboard wheels hanging from a shower rack all combining as a piece of amazing Conceptual Shoe Art. I was shaking. The photo by Minh Tran shows the shoes in their glory. Why it was made and who made it was a bit of mystery and to explain it risks confusion but it has something to do with a clothing line and an event held at a fashion design studio to celebrate it. What matters is that, for a second, when I saw this picture I was thinking, I’m really on to this Shoe Art thing in Portland. It’s happening. People are nuts for shoes and Shoe Art too. 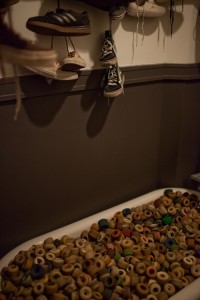 Addendum: Last week I posted a picture of shoes on a wire taken by Karl Lind. I liked Karl’s photo but when I found a shoe/wire shot that I took in September I knew I would be remiss in not including it in this post. It’s similar to Karl’s and it includes the kind of hopeless “what am I doing here vibe” that the shoes seem to be communicating or maybe they’re just wondering how they’re going get off the wire. 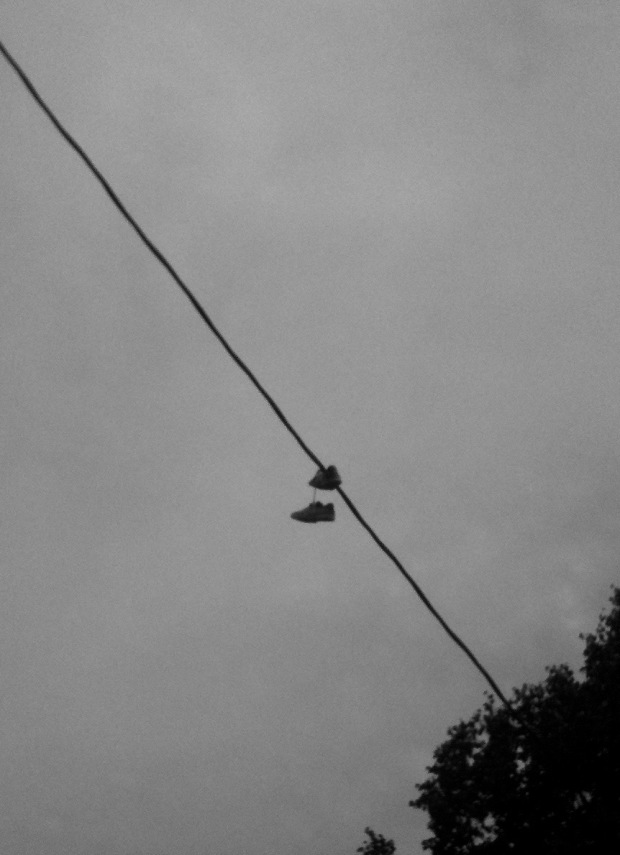 It took me a while to reflect on and collect enough shoe images to fully explore the Portland Shoe Art Scene. As I did this collecting and reflecting it occurred to me that Portland actually has a Shoe Art Scene. It seems to be a combination of shoe street art, an endless supply of shoes slung on telephone wires, shoe sculpture and lonely, single shoes strewn on Columbia Blvd., which inspired my own attempts at shoe art and led me to concluded that there is added value in art if you can give the work an amazing title. Then, in all my pondering, I discovered some real shoe art that could actually make the Portland Shoe Art Scene legit. 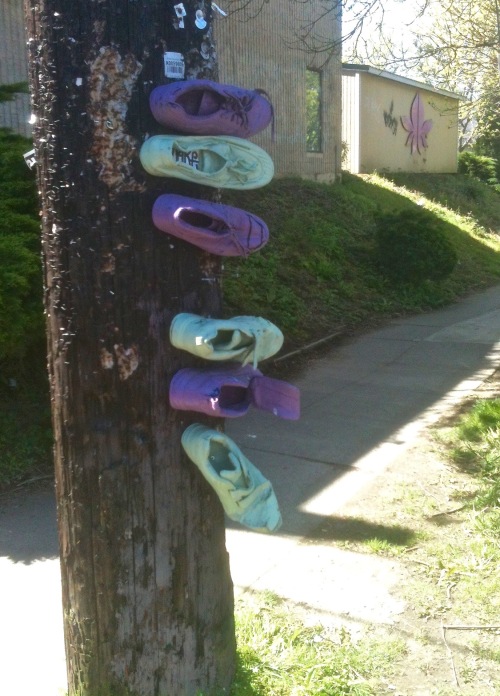 First I go back, almost to where it all started. In the Spring of 2015. I was substitute teaching at a school located a block away from Division Street. I hunted down a cup of expensive and seemingly exotic coffee from a new coffee shop on my lunch break. On the way back I saw some mind-blowing, public art that was part three-dimensional graffiti and part surrealist, guerilla street art show. I captured the art at it’s peak with a photograph. I had a feeling that with this art being out in the elements it would be in a constant state of decay. Great shoes, great colors and it was right on the telephone pole next to the street in the full view of everyone who had to walk by. The following fall I returned to the school for a day, saw the shoe art pole and witnessed the decay that had set in over the summer. Some of the shoes were missing. I didn’t take a picture, probably because I was in a hurry to get back to work. I realize now that I would have hated to see the shoe art in any other condition than when I first encountered it. It’s unclear whether the street art got no respect or had no way to be preserved. I never saw a “do not touch sign” or a security guard around who would have kept people from getting too close and stealing shoes off the art.

Any art car in the world is going to raise it’s artistic level with the presense of a shoe. This car created by Purple Planet Artist Corporation heads over the top with the addition of the mannequin calf and ankle attached to a bright, shiny, hot pink high heel shoe. It towers above all the other figurines adding an air of grace and dignity to its artistic surroundings. The shoe is so stylish, garish and fashionable that it comes close to off setting the balance of the whole roof top attempts at car art as it continues to attain an amazing flagship triumph of Shoe Art on this art car’s roof. This shoe holds it’s heel high and looks even better parked outside the regal façade of Roosevelt High School. I plan to explore, in greater depth, the local art car phenomenon that this particular art car is part of but in the meantime I’ll appreciate the inclusion of shoe art as a subset to the rest of the art car’s expression. 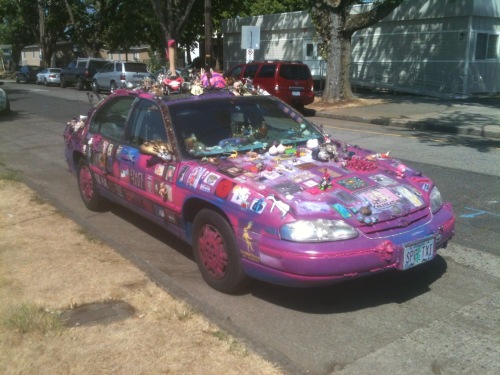 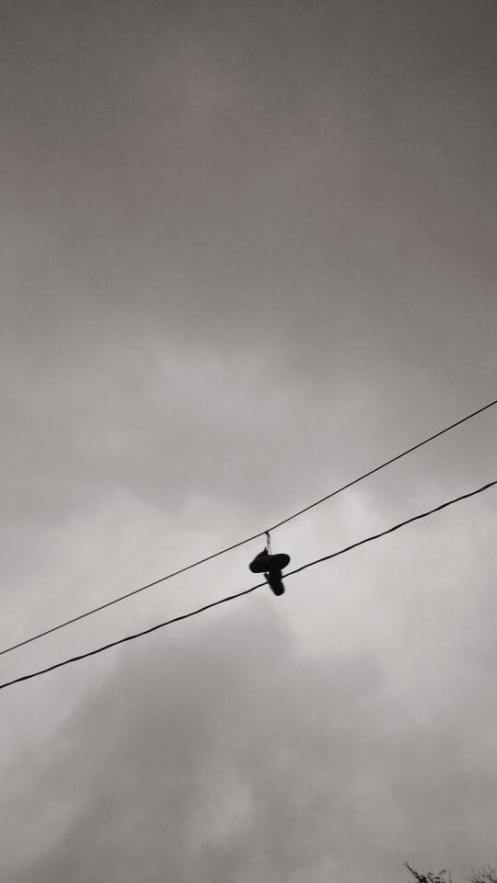 You might think I’m grasping at straws when I include the ubiquitous pair of shoes slung over the electrical wire as being part of the Portland Shoe Art Scene. We all know it’s a national phenomenon. While this type of creation is everywhere, it is also annoying to someone like me who sees it as a waste of perfectly good shoes. This is coming from someone who keeps shoes to the point of practically sloughing off my feet. Holes, rips, tears, knotted and tattered laces, I wear them until I can’t walk in them anymore. When I see shoes causally thrown around the neighborhood, I always assume they still have a few miles in them. Consulting the Urban Dictionary I discovered that shoes on wires hint at drug activity. “Places where you see shoes that are thrown on a telephone wire indicate drug houses or places where you can purchase drugs,” said the Urban Dictionary. It feels more like an untidy decoration to me. I had to appreciate the way filmmaker Karl Lind portrayed a pair of wire shoes in a snap shot he posted on Facebook. I think the proportion of sky to shoe is just right. His picture captures plenty of gray sky that envelopes the silhouetted shoes. The photo doesn’t highlight the shoes but it fits them nicely into the space they share with that bleak sky. Captured in an artistic way, these shoes more than aspire to become Shoe Art. They have arrived, in all their anonymous glory.

Next Week: Part 2 of our Portland Shoe Art exploration. 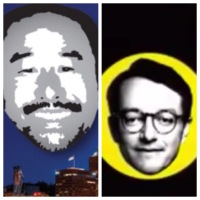 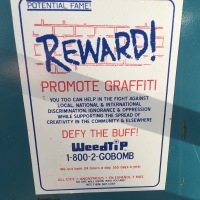