Sorry to disappoint. I’m sure you were all lining up in anticipation of reading about a trip to Salt & Straw for a scoop of exotic flavored ice cream. No, I’m dashing this off to share an experience that had me feeling like a real journalist after having a run-in with BREAKING NEWS! Returning home from work on my bike on Thursday afternoon, I heard sirens and saw police and fire trucks zooming past me. I noticed cars turning around because the street was blocked. I kept pedaling because my bike and I could squeeze by anything.

The first thing I noticed when I got close were two dogs on top of the vehicle pacing. I rode around the school bus in the crosswalk then realized the vehicle was on its side. There was debris in the road, on looking neighbors, a woman with two more dogs was sitting down and a half dozen firemen surrounded the scene. Feeling the excitement and realizing I could take pictures, I dug my phone out. My shots were taken quick. I was walking my bike through the scene while I grabbed two pictures then I acknowledged one of my students standing with his mom and I got back on my bike and peddled off. 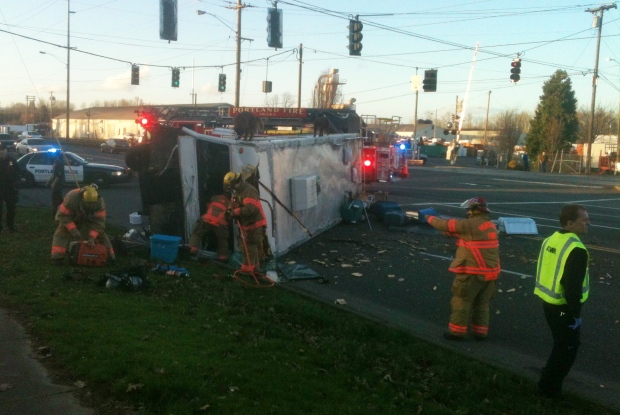 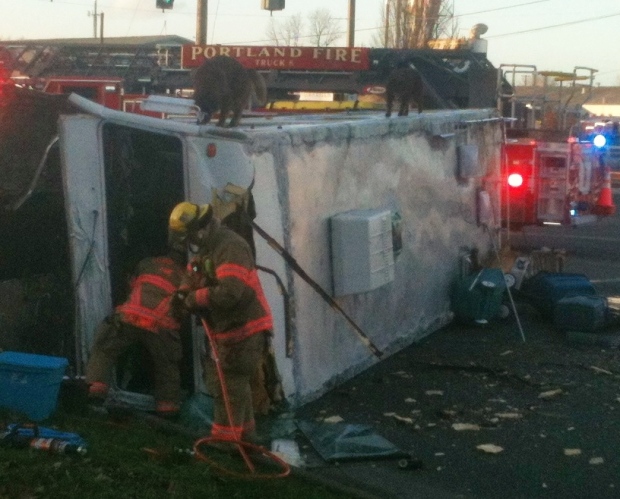 Dogs on a make shift roof.

On the ride home, my brain buzzed—thinking about my crash photos. I had not seen any other media at the scene. So far I had an exclusive! Once home, I tweaked the pictures. They were a tad dark. Then I composed the following email and sent it to the news desk of one of the local TV stations.

Hey, I happened upon this crash on Columbia Blvd. in North Portland. I’m not sure why the dogs ended up on the roof of the overturned vehicle. You’d be welcome to use these photos if you’re covering the story.

I received no response. Later I saw a mention of the crash on another station’s news broadcast. They showed a photo that looked similar to the one I had taken. It made me realize there had been plenty of people with up to date cell phones  snapping away. I realized anyone with a decent phone could have tweeted, emailed or Instagramed a picture lickety split. The thought of riding home on my bike before sending my photos had me feeling more like the pony express.

The next day on my way to work I stopped at the accident site. There was remnants of the accident left behind piled on the roadway. Later, I talked to the student I’d seen about what happened. The student was quick to tell me that he had been on the news. I asked him the pressing question: “How did the dogs get on top of the RV?”

He responded, “they were inside of the motor home, then one lady came out, the other one was stuck and her leg was stuck with the steering wheel and stuff.” He said he had been driving with his his mother and they had been seconds away from seeing the accident. I got a clear sense of how it happened when he told me a truck had been involved in the accident. “The truck had pieces of the motor home in it. It was a semi,” he explained.

In my attempts to take this story to a wider audience I learned a few things. The first thing would probably be to take higher quality photos. My pictures wouldn’t have looked good on TV. I’m really wary of getting cornered in an AT&T store in an attempt to upgrade my phone all while signing my life away again. I also realized I need to be ready. I have to have all the tip lines for all the local news stations programmed into my phone along with email contacts. It also makes sense to contact all of the news stations instead of pinning all my hopes on one station. I also had to consider that maybe I was presumptuous to ask them to include my name and the name of my blog/news organization. I’ll take publicity where I can get it, if I can get it. In the larger scheme of things I’m not sure why I want to work so hard for nothing. Later it occurred to me that this wasn’t much of a story in light of all the breaking news that was coming out of the refuge occupier situation in Harney County.

Addendum: Speaking of scooped, I was impressed (with myself) to see the Willamette Week devote their recent issue to shoes. I was already week a head of them on my own shoe coverage. Read on (link above) if you’re in need of more shoe reporting.