The key out the window gag was here.

Everybody’s writing about Portlandia now. The eighth and final season began airing January 18th. I missed the mark on the advanced promo. Someone forgot to send me the DVD boxed set of seasons 1-7. I live in a neighborhood where segments of the show were taped which can’t be hard since it was shot all over town. It offered a behind the scenes look at the show’s creation. Seeing neighborhood haunts on screen makes the show special to me. I have encountered a love-hate attitude for Portlandia. It may be closer to indifference, but people have been quick to tell me when they didn’t find it funny. There’s also the idea that the show has been the ruin of Portland. At this point it feels like we’re trapped in one long Portlandia sketch that’s running a bit too long. I’m afraid to see how it ends.

Last August a notice appeared on the door. Taped up with blue painter’s tape, it informed us that Portlandia would be in the neighborhood shooting one last time. The notice included a nice note that was signed by Janet Weiss. It took me a second to realize that this was, the Janet Weiss, Carrie’s bandmate and that she was also working for Portlandia. The fanboy in me wanted to call the phone number she included but I don’t really want to bother anyone.
The initial reaction to the Portlandians coming to Kenton had a vibe similar to Indians receiving the Pilgrims. There was excitement about the arrival of these exotic and interesting people. My only Carrie sighting was spotting her in the neighborhood wearing a striped sweater which had me wondering if it was something the costume department was making her wear. It wasn’t long before I became jaded. By season 8 they didn’t hang around long and I couldn’t be bothered to razz local antique store owner Mo Bachmann about celebrity sightings. I was always curious about what felt like a mythical place, this place known as Base Camp. When the crew showed up, there seemed to be a dozen canopies with people working on laptops underneath. The show involved many people, some doing unknown things. Mostly I tried to stay out of the way. 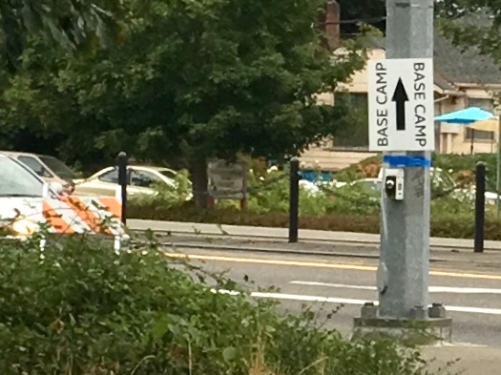 Of course I’ve got Portlandia stories. During one of the early Kenton shoots I walked our dog, Max, by the make-up truck. Star hungry, I tried to look through the blind covered window then realized I was looking at a partial image of Juliet Lewis. Meanwhile Max was peeing at the bottom of the last step of the trailer while the owner of this converted RV, who was standing watch, looked on in dismay. It’s been a source of pride for me, and Max, knowing that Juliet Lewis stepped in dog pee after getting camera ready. I didn’t get to watch her scene which was shot in the front yard of a house up the street because I had a very Portland type event, a book group meeting across town in a SE bar.

Juliet Lewis acted on this lawn!

My one beef with the show was with guest appearances. Portlandia had the connections to bring in all kinds of interesting performers and big names which had me seeing lost opportunities for local talent. Sometimes it felt like they were showing off their connections. Maybe I needed more Ed Begley Jr. and less Jeff Goldblum. Who wouldn’t want to be on a show with Fred and Carrie? I was unavailable for what seemed like my one chance to be an extra because I was working a temp job that I was hoping would become a real job. At least if you watch this season you can probably catch Henry Rollins’ and Chris Novoselic’s appearances so the star turns aren’t always bad. The show had a homegrown feel but it was big time. Any show with Lorne Michael’s name attached is going to be. They had the freedom and the money to book any guest star they wanted. That had to be part of the fun.

A show is only as good as the material and I was always impressed that the ideas kept coming allowing an 8 season run. Some people may have been jumping off the Armisen train or they couldn’t take the spoofing of Portland. The show evolved. There were recurring characters and a city that continued to provide inspirational absurdity. The show’s feminist bookstore employee caricatures seemed dead-on. Kyle MacLachlan’s Mayor portrayal was always good. Who could forget the gender bending Lance and Nina? The joke was on all of us. Everyone involved with Portlandia seemed to be having a great time making the series while creating multiple opportunities for wig wearing. The show’s humor could get tedious. There were times when Fred was selling a bit too hard but the comedic style was infectious. Portlandia inspired people to create their own comedic riffs in the show’s style. The only trouble was they had cornered the market.

Back when I had days off during the week, I was feeling annoyed and left out—no guest appearance for me. The neighborhood was full of Portlandia crew. I sought refuge in the local coffee shop when who should show up–the Portlandia gang, cameras blazing as they worked on a brief side bit without Fred and Carrie. If I’d been sitting in the right place I could have been in the scene. It was chaotic. They barged in on what seemed like a group of unsuspecting coffee shop patrons. That afternoon I was inspired watching director Jonathan Krisel’s seamless direction. The scene involved a bureaucrat minion assigned to stop people from working on laptops in coffee shops. We found out later that the orders were given by an impostor mayor played by Rosanne Barr. Two quick takes featured a suit wearing actor slapping laptops. After this blitzkrieg, the Portlandia crew was out the door reassembling across the street for the next shot.

I held off immersing myself in Portlandia’s recent medial blitz. I didn’t watch the 60 minutes piece. It was disappointing to find out it wasn’t solely focused on the show. I hope to catch up on the other articles I spotted in the local weeklies after I post this. Everyone else’s thoughts were going to cloud my own. A tiny bit of an interview I heard on OPB’s State of Wonder seemed to be offering up a critique of why Portlandia may have tarnished Portland’s image. It had something to do with the idea that Portland was once an undiscovered gem of a place and the show brought attention to it. I switched over to the AM dial as not to dilute my own weak kneed tribute with the thoughts of others. I’ll admit I haven’t kept up with Portlandia. The last time I tuned in it was wigs and track suits but I’ve appreciated the opportunities to see Kenton on the little screen. I recall the bike vs car stand-off led by Spike being set in the heart of Denver Avenue. There was a moment of surprise wondering how they slipped past us to shoot the scene? The show’s opening makes Portland seem like the coolest place to live. The gurgling theme music created sentimental images out of rows of houses, Powell’s bookstore, a guy playing bike polo and a bridge lift. That’s the Portland I’ll remember.

What should I wear?

How can anyone complain about a show about Portland? Everyone is looking for the reason people keep coming here making things crazier and crazier while overlooking that Portland is the kind of place that inspired a show. How many other cities have their own shows? I remember Carrie Brownstein being interviewed on the OPB show Think Out Loud. She was comparing her Portlandia’s seasons to Clash albums. At that point they were on their “Sandinista” season. It’s amazing that they made it past Cut the Crap and somewhere up around Live at Shea Stadium where Joe’s stage banter had me thinking that he wasn’t quite getting that people were really in the stadium to see The Who. I can’t say Portlandia overstayed their existence. I’m assuming the ideas were still fresh and everyone involved continued enjoying themselves. I sure can’t imagine another show about Portland. It’s been done.
* * * * *
P.S. I don’t know what the hell I was trying to do with that title but any time an English major has a chance to reference T. S. Eliot it proves irresistible. 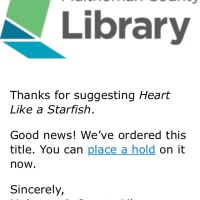