A photo on a bulletin board in the art supply store on N Lombard St caught my eye. A flyer advertised an art car fundraiser. I knew the car having seen it around town. It was especially memorable parked in front of Roosevelt High School. I posted on Facebook about the time the car drove past our house. I had long wanted to contact the people behind this car and now I had the chance.

In praise of the art car.

When I think about meeting people involved in outsider pursuits like art cars, graffiti or sticker culture, I fear the people involved might be subversive, anti-social or pretentious. It’s unheralded anxiety not based on experience. Myriah Day and Chris Landon owners of the art car Space Taxi couldn’t have been more welcoming. The fundraiser was a combination cook out, open house and opportunity to decorate, or redecorate the car. My wife, Ronna, and I were offered food and drink and friendly company. We were encouraged to contribute our own artistic touches to the car. Boxes of paint, glue, and art materials were provided.

The inspiration for the art car started when the couple owned a fancy Carmen Ghia which brought them attention and compliments. When Myriah became pregnant with their son Harvey, it must have seemed like a time to make changes. Chris realized he was too tall for the car and got rid of it. Around that time Myriah received a car from her grandparents.

“It was a plain white car and nobody talked to us about our car anymore,” Chris said. Mariah pointed out that the white Chevy Lumina, resembled a police car so people were always doing the speed limit around them. “It was no fun,” Chris admitted. He had always wanted to make an art car. Myriah suggested the art car by committee approach. 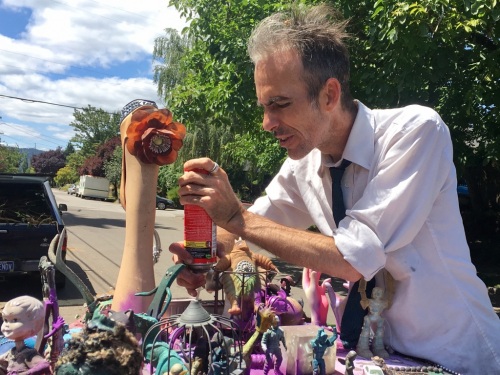 The original design was planned out. Myriah imagined it like a quilt. They started with a grid of 298 squares, it was organized, a map was made, squares were numbered, contact info was gathered but the plan resulted in an overwhelming bureaucracy that at least got the project started. Through the years the car continues to be decorated at art car parties. “I always say that (Chris) makes the car look better than I probably would but I bring the people together. I’m the social component,” Myriah said. One decorating gathering at a Last Thursday event on Alberta Street had them mobbed by eager assistants. The resulting chaos had Chris accidentally setting Myriah’s hair on fire. 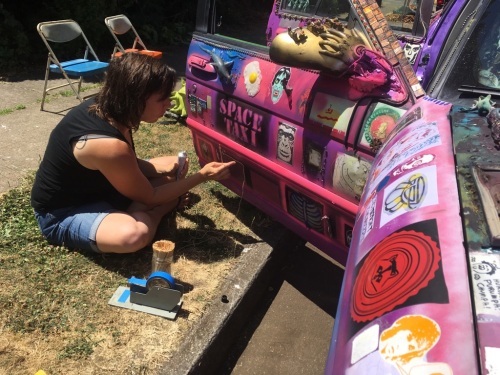 Art car parties help with the upkeep of the car’s design. Damaged squares get painted over and new objects are added. Miffed about the “Keep Portland Normal” sticker peeling off the car, Myriah laughed at the irony of it’s message as she pulled what remained off the bumper.

The car is now in the neighborhood of twenty years old with over 200,000 miles. It serves a dual purpose, not only is it a Portland Icon, it’s the families’ only car. After replacing the head gasket, catalytic converter and getting new tires, fixing the transmission merited the fundraising campaign. Myriah and Chris weren’t ready to let the car go. They felt a responsibility to the community to keep it on the road.

Somebody call for a taxi?

Not even a car crash could stop Space Taxi. Myriah had been hit in a parking lot by a driver who claimed not to have seen the car. A comment she found laughable. The insurance company wanted to total the car until she pleaded her case for its artistic value. It’s not just a Chevy Lumina, anymore.

Myriah parks the car in front of Roosevelt because she teaches Chemistry there. Students look out for the car and let her know when they think someone’s messing with it. The car made her conscious of the need to prove she was a good teacher and “not just a weirdo.” 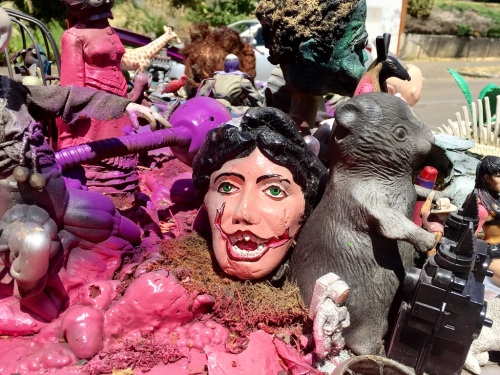 Something to sing about.

Space Taxi’s charms can be found in the original quilt pattern with varied art styles and scenes found on the the hood and roof. Ronna pointed out that every time she looked at it she saw something different. I could look at it a thousand times and continue to see new details. I did wonder if decorations were capable of flying off, but I can attest to the strength of the glue used for bonding.

“It’s really funny to look out at a sea of cars and see a foot,” Chris said. This kind of foot spotting can help them find the car in crowded parking lots. Chris recalled a time when they discovered a plain white version of their car in a parking lot which had them thinking, “Oh, no, someone took all of our stuff.”

Space Taxi has appeared in the Portland Orbit once before in a post about Shoe Art. I realized I was looking at a different shoe, one that had been replaced due to theft. This one needed some retrofitting, including cutting out the toe section, but it’s now secure.

There can’t be a dull moment driving an art car. Myriah mentioned how they collect facial expressions in their minds examples include the image of a scared parent dragging away a curious kid or an onlooker shaking their head in disgust, an expression that changed to a smile and a thumbs up sign when the person realized the scowl was spotted by the art car’s occupants.

Mariah had great advice on art car creation. “The biggest thing I always tell people is you have to make sure the engine works because you’re putting all this time in a car. People are like I have this junker I want to turn into an art car and I’m like why would you ever put all this effort to make an art car to not have the engine work. It’s heartbreaking.”

You can help Space Taxi by contributing what you can: